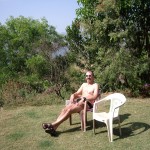 Some friend asked me informations about Kamshet so I thought it would be nice to write what I know about this site.

It’s a good site for people living in Europe because it is flyable between mid october till beginning may, exactely when we are normally keeping our gear guarded somewhere at home.

Also it is just 2 hrs from Mumbai, a very important international hub served with direct flights from all major europen airports at good prices.

So if you have just one week off it is easy and hassle free to reach.

Kamshet has been discovered as a flying site in the late 90’s and since then has developed into a popular destination both for indian and europen pilots.

Now as far as I know there are 2 paragliding school and clubs.

I went there several times between 2003 and 2006. At that time Melissa , a former Catay Pacific hostess and a pioneer of Kamshet paragliding, was using her villa over the lake as a guest house for paragliding pilots. It was really  nice since she was able to create an easy going, paragliding community athmosphere .

After she got married she stopped the activity but other peope took her heritage.

Here are two web sites where you can have more informations about this site:

If you have more days, it is also worth to visit another site, not so far away.

Panchgani, a popular holiday resort near Puna. By car it’s just about 3 hours from Kamshet and 4 hours from Mumbai.

When there I was staying at Ravine Hotel, a confortable place near the take off.

I really recommend this tour. You can enjoy both cross country flying and the best of indian food and environment…

I posted some pictures in the gallery section.